I found a couple of days ago a bug that I hadn’t seen before: when you create an add-in with Visual Studio 2013 (you need to install the VS 2013 SDK), hit F5 to debug it, which launches a second VS 2013 instance and close this instance (even without loading the add-in), you get:

An unhandled exception of type ‘System.Runtime.InteropServices.InvalidComObjectException’ occurred in mscorlib.dll
Additional information: COM object that has been separated from its underlying RCW cannot be used. 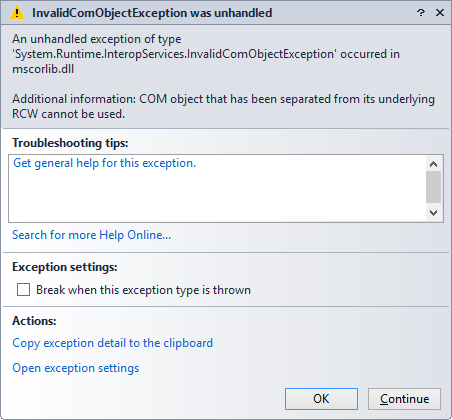 Searching the web I have found that it happens also with packages and DSL designers of the VS 2013 SDK, that is, with any kind of extension. It was reported on Microsoft Connect:

and Ryan Molden (MSFT) acknowledged the bug in this thread of the MSDN VSX forum about packages:

We will need to live with this bug until the Windows team (which owns the CLR, not the VS team) fixes it. An interesting thing is that I hadn’t seen this problem until I reformatted my laptop with Windows 8.1 a couple of days ago. Previously I was using Windows 7 and in fact I haven’t been able to reproduce the problem today on another laptop with Windows 7.