Being quite a perfectionist, there was one issue in older versions of my MZ-Tools 8.0 add-in for VBA that was not right for me: it required .NET Framework 2.0, which is installed by default on Windows 7, but not on Windows 8, Windows 8.1 or Windows 10, it’s an optional feature: 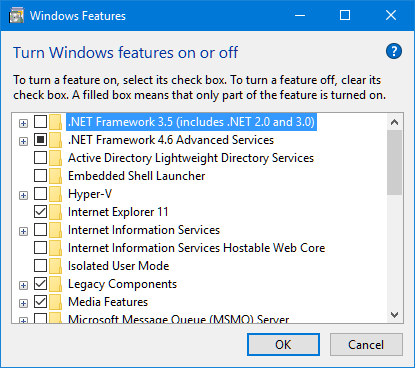 So, installing MZ-Tools 8.0 for VBA on Windows 8.0 or higher likely you would get this dialog:

And then the user should download and install .NET Framework 2.0. Needless to say, this is mostly inconvenient and can hurt sales, so I thought it would be nice if MZ-Tools 8.0 for VBA could use whatever higher .NET Framework was installed on Windows (such as .NET Framework 4.0 on Windows 8 or higher).

Before digging on how this can be done, some basics: a .NET Framework is composed of a Common Language Runtime (CLR), which contains the virtual machine for .NET, with the JIT compiler, garbage collector, etc. and a set of libraries. So:

There are three kinds of .NET Frameworks:

So, there are two aspects that an add-in for VBA must consider:

Now the question is: given a native process that must load a .NET-based add-in, which CLR version does it use?.

An .exe process can have an .exe.config file that specifies the supported/required runtimes of the .NET Framework. Visual Studio uses such .config files but Office apps don’t, so they don’t care about CLR versions (they can use CLR 2.0, CLR 4.0, or even both at the same time). By no means an add-in should install an .exe.config file to modify the behavior of an Office application regarding supported/required CLRs, because it can break other add-ins.

The first approach is to make the setup to detect which CLR versions are installed on the system:

Note: to register the assembly for COM Interop, the setup cannot use regasm.exe, not even the version of .NET 4.0 (C:\Windows\Microsoft.NET\Framework\v4.0.30319\regasm.exe) because regasm.exe sets always the Runtimeversion value to the value of the CLR that the assembly was compiled against. Instead, the setup must create the registry entries for COM Interop directly (see the required entries here).

The second approach is to use a COM Shim, which I explained in Isolating .NET-based add-ins for the VBA editor with COM Shims. Since a COM Shim is a native C++ dll that loads the CLR to create a custom AppDomain and to load the assembly, it can decide which CLR version to load, depending on which CLRs are installed on the machine: if CLR 2.0 is installed, it loads it, and if CLR 2.0 is not installed but CLR 4.0 is installed, it loads CLR 4.0.