Yesterday I got a bug report from a user of my MZ-Tools package for Visual Studio 2015:

System.NotImplementedException “The method or operation is not implemented.”

As you may know, SQL Server Database projects are quite good automation-friendly projects, that is, they implement EnvDTE interfaces (EnvDTE.Project, EnvDTE.ProjectItem, etc.) so you don’t need to use the low level IVsHierarchy, etc. interfaces of Visual Studio. But somehow, they missed to implement something somewhere.

I tried to reproduce the problem on my side to no avail. My extension worked happily with the .sql files (EnvDTE.ProjectItem) of that kind of project. So, which kind of EnvDTE.ProjectItem didn’t implement the IsOpen property? The user sent me a helpful clue: he was using a database reference. I was not aware of that thing, but certainly in SQL Server database projects you can add references to databases: 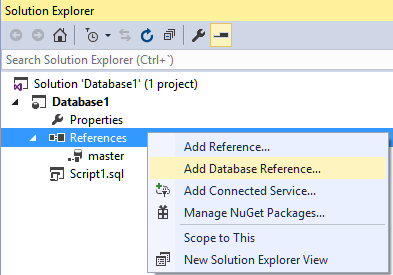 And as soon as I added a reference to the “master” database, I could reproduce the problem. So, my extension was treating the ProjectItem nodes below the References node as files that could be “opened”, and the ProjectItem.IsOpen method was not implemented (which is certainly right). But, how is that the nodes below the References node were being processed for database projects (which is incorrect) while they were not processed for regular (C#, VB.NET) projects?. The reason is that for regular projects, the EnvDTE.Project.ProjectItems collection of the project doesn’t return the References node, which is correct. For database projects, the EnvDTE.Project.ProjectItems collection does return the References node, which is a bug. I wanted to verify that the internal implementation of database projects has this bug so I used .NET Reflector to see the internals of the Microsoft.VisualStudio.Data.Tools.Package.dll package and I found that there is a ReferenceContainerNode type that has a GetAutomationObject that returns an OAReferenceFolderItem instance: 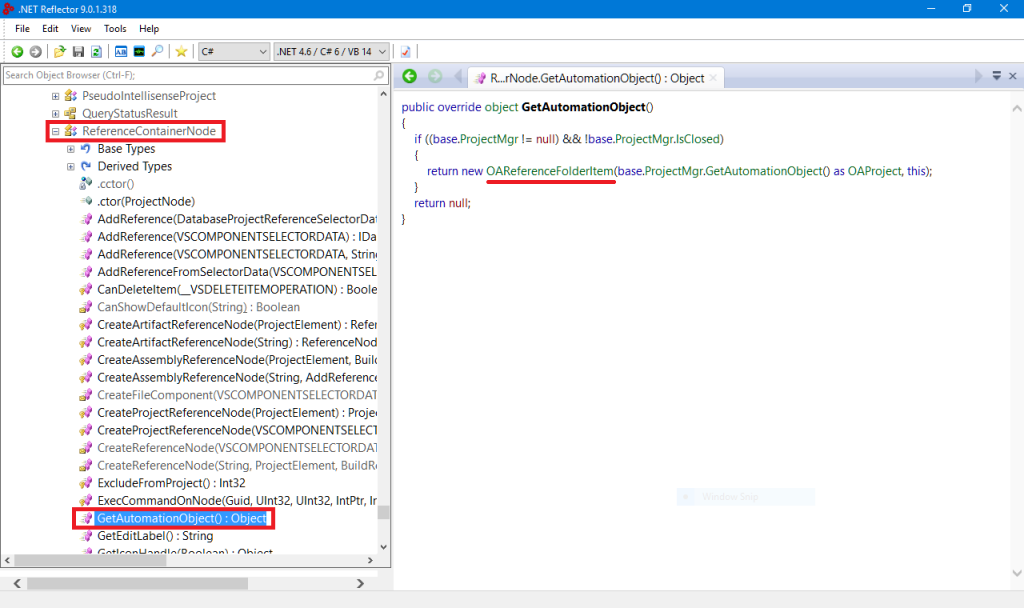 There shouldn’t be a folder for references in the automation model (EnvDTE). The automation model provides the VSLangProj.References collection to handle the references of a project. I won’t report the bug because there is an almost zero chance of Microsoft fixing it, and anyway I needed to find a fix for the current version of the SQL Server Data Tools, which took me to the next problem: how can an extension identify reliably the “References” ProjectItem?.

I could check if the Name property of the ProjectItem is “References”, but that approach is always prone to errors due to localization (in Spanish would be “Referencias”). The SQL Server Data Tools doesn’t seem to be localized, but I wanted to investigate another approaches. It happens that the IVsHierarchy of the References node implements an interface named IReferenceContainer. So, one could cast that node to IReferenceContainer and if the cast is successful then it’s the References node. Alas, that interface is declared internally in database projects, and in MPF.Project.NonShipping.dll for other projects. At the end, I opted for getting the EnvDTE.ProjectItem.Object property, convert it to a string, and compare it to “Microsoft.VisualStudio.Data.Tools.Package.Internal.OAReferences”, which is as bad as comparing the Name to “References”, but anyway, it works for now.