This is the nth time that I find this problem (and I am not the only one), so I am going to document in this 3rd post another cause for it, that happens on Window 10. The problem is that suddenly, the VBA editor of Office or VB6 prompts you to repair some version of Visual Studio. In this case, VB6 prompts to repair Visual Studio 2005 (that I have installed on my main development machine) but it can also happen with Visual Studio 2010, etc.: 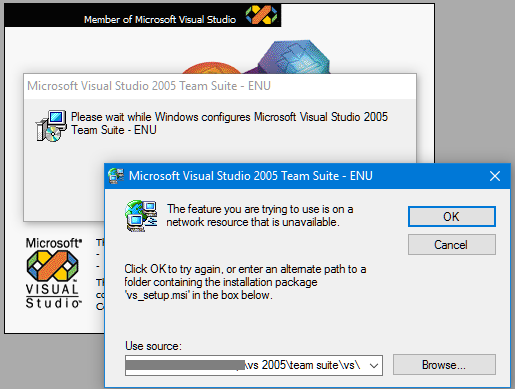 Since I adopted Windows 10 as my main OS, I have seen this problem twice, in 2015 and in 2016, and it has the same cause in both cases as I will explain, but different to the ones of 2014 and 2012. To diagnose this issue, you need to follow the procedure explained by Heath Stewart in his blog. So I started looking for events with ID 1001:

As you can see, the error doesn’t tell you exactly which is missing. The events with ID 1004 provide the actual cause:

But which is the root cause that makes that a file suddenly disappears from that folder? It is the installation of the major updates of Windows 10: Update “1511” in November 2015 and “Anniversary Update” 1607 in October 2016. As you know, the next one announced a couple of days ago will be “Creators Update” in 2017 and the issue will reappear in 3D ;-). Each time that a major Windows 10 update is installed, the previous Windows installation is stored in a backup folder “Windows.old” (which includes the .NET Frameworks folders, and the .xml files in question). It seems that the Windows 10 update is smart to detect that you had .NET Framework 2.0 installed (it’s an optional feature of Windows 10, not installed by default) and it installs it for you, but not smart enough to detect the missing files. So, alas, the .xml files are not restored and cause this issue. In 2015 I still had the Windows.old backup folder and I was able to restore all the missing .xml files using BeyondCompare, the folder comparison utility that I love. Now in 2016 I deleted the Windows.old backup folder before I realized the issue, so I had to provide the .msi files to the prompt dialog, copying them to the hard disk before, of course!

I hope this helps you if you encounter this issue.