I still see, even as today Jan 10, people asking why you get this error when trying to install your extension on Visual Studio 2017 RC: 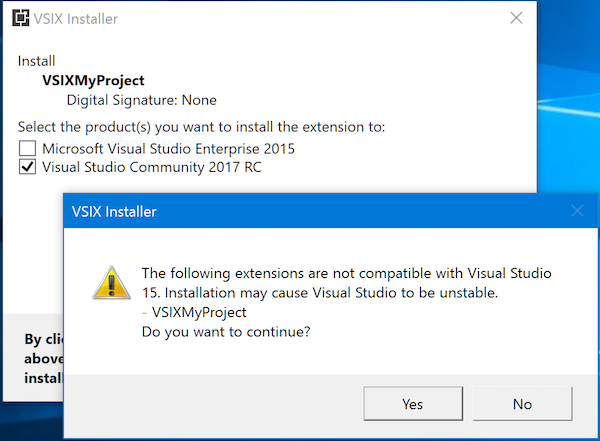 or this other one when you try to upload the extension to the Visual Studio Gallery:

“This extension targets Visual Studio 2017 but was not build with an up-to-date VSSDK. Please make sure to update your references and try uploading again. Note: you’ll also need to add Prerequisites to your extension.vsixmanifest.”:

But that is not enough to add compatibility for Visual Studio 2017. Even worse, some people wonder if you can live ignoring those warnings.

The short answer to make an extension compatible with Visual Studio 2017 is the following:

The long answer, with links to resources is on my post Visual Studio 2017 RC announced. Extensions need some changes, and for advanced topics read Some implications of the new modular setup of Visual Studio 2017 for VSX developers.